Voluntary Medical Male Circumcision (VMMC) is widely recognized by public health experts as a key component of HIV prevention.  According to the World Health Organization, medical male circumcision reduces the risk of female-to-male sexual transmission of HIV by approximately 60%. In response, Grassroot Soccer (GRS) created an soccer-based intervention to increase demand and uptake of VMMC services among male adolescents, called Make the Cut.
After piloting the Make the Cut intervention in Zimbabwe, GRS continued its VMMC demand-creation work in Uganda as part of the Menstrual Hygiene and Safe Male Circumcision Promotion in Ugandan Schools (MENISCUS) trial. The results of this work were recently  published in PLOS ONE, a peer reviewed journal of scientifically rigorous studies. The research article is available online: Soccer-based promotion of voluntary medical male circumcision: a mixed-methods feasibility study with secondary students in Uganda. 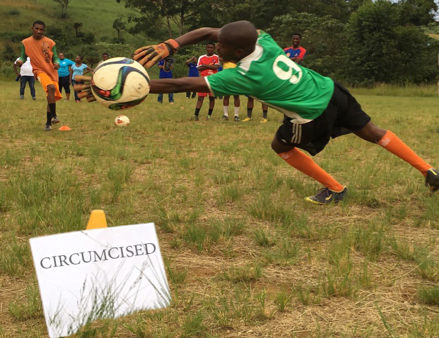 Make the Cut intervention in action.

During Make The Cut, recently circumcised “coaches” facilitate a 60-minute educational session with male adolescent students. The intervention uses a penalty shoot-out game as a metaphor for HIV prevention, including the role of condoms and VMMC, and coaches share their own personal stories of VMMC to motivate boys to undergo the procedure.

In this recent study in Uganda, Make The Cut was implemented in two secondary schools in Entebbe, Uganda and VMMC uptake was measured for three months. The first school saw uptake of approximately 10%. The curriculum and approach were then modified and implemented in a second school, which showed uptake of over 26%. These findings provide further evidence Make the Cut can be effective in increasing VMMC demand both in locations beyond the original pilot country of Zimbabwe and when implemented by partners. Qualitative results highlight the important role of family and peer support and the coach in facilitating the decision to circumcise.
Grassroot Soccer has always been an evidence-based learning organization. By using a process of field testing and piloting, GRS is able to adapt its curriculum and approach to achieve greater results. This particular study around VMMC demand creation is an excellent example.
Grassroot Soccer would like to thank the many co-authors of the study; in particular, we pay tribute to George Miiro, the lead author, from the Uganda Virus Research Institute, Entebbe, Uganda, who sadly passed away. He was an incredible person and was extremely passionate about this project.

Worth 1,000: ‘Changing the World Through Soccer’ Photo Essay