As a Grassroot Soccer Pro Ambassador, international football star Freddie Ljungberg recently visited Grassroot Soccer (GRS) Coaches and participants at the Khayelitsha, South Africa Football for Hope Centre to learn about our efforts to empower young people through the power of football. 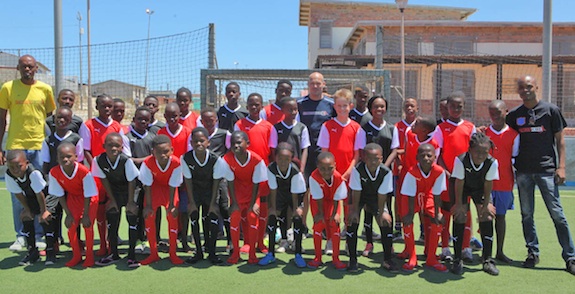 During his visit, Ljungberg spoke with GRS Coaches and participants about the difficulties of life in Khayelitsha and how they foster hope amongst themselves and their peers, through the GRS soccer-based adolescent health curriculum. He took part in the GRS HIV-awareness activity Risk Field, learned how to make a ragball, and joined Coaches and participants in a pick-up soccer game. The star handed over a generous Swedish Postcode Foundation donation check as well as PUMA soccer kits for youth. Grassroot Soccer is incredibly grateful to the Swedish Postcode Foundation for providing impactful support to our programs and supporting this inspirational visit, and to PUMA for providing local youth the opportunity to practice and play in outstanding kit. 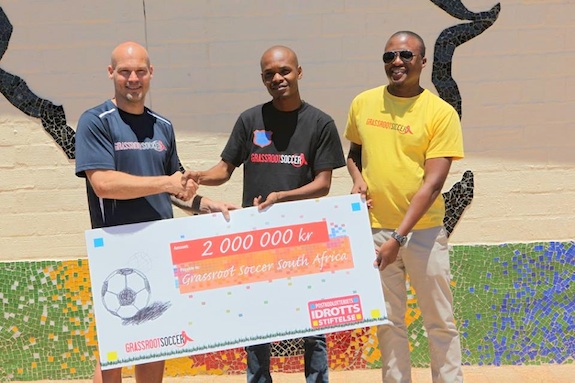 Ljungberg, originally from Sweden, had an illustrious 17-year playing career that included captaining the Swedish National Team and a successful nine-year stint with Arsenal FC. He played a critical role in Arsenal’s success throughout the early 2000s when the Gunners were considered ‘invincible.’ Other highlights include a spell with West Ham United, prior to moving over to the MLS and playing for both the Seattle Sounders and the Chicago Fire. An international for a full decade, Ljungberg earned 75 caps and was captain of the Swedish National Team. 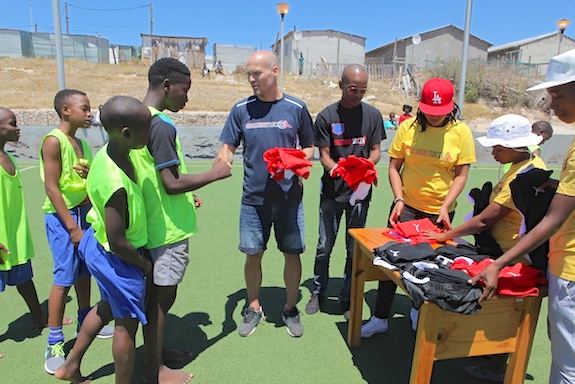 Ljungberg joined Grassroot Soccer as a Pro Ambassador in 2013, and supports the organization through media outreach, charity soccer matches and fundraising. He recently attended the Grassroot Soccer 2015 World AIDS Day Gala at London’s One Marylebone venue in Westminster, with David Beckham, Robert Pires, Sir Alex Ferguson and other high-profile sports stars. He says, “I first traveled to Cape Town on holiday; we took a tour of the Khayelitsha township and I was shocked at the poverty. Watching the children run around in these terrible conditions really affected me. How could I not get involved? I’ve had a blessed career on and off the pitch, and I really wanted to give back.” 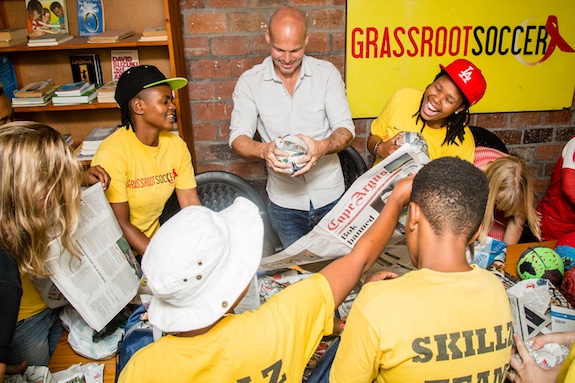 Freddie Ljungberg, center, learns how to make a ragball from GRS coaches participating in an entrepreneurial project that creates an income stream for individuals and the RV United soccer club

Grassroot Soccer’s Pro Ambassadors are international soccer stars that inspire our young participants and raise awareness of the organization’s work. A big thank-you to Freddie for inspiring GRS participants and Coaches, and for representing GRS!

Grassroot Soccer Activities Up and Running at the Jakaya M. Kikwete Youth Park in Tanzania