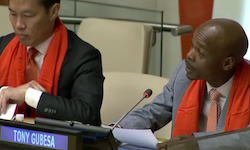 On November 25th Grassroot Soccer was honored to take part in the the United Nations Official Commemoration of the International Day for the Elimination of Violence against Women. Grassroot Soccer South Africa Site Coordinator Tony Gubesa spoke on a panel alongside UN Secretary-General Ban Ki-moon and Under-Secretary-General and Executive Director of UN Women Ms. Phumzile Mlambo-Ngcuka, as well as other distinguished presenters.

The event, part of the UN Secretary-General’s UNiTE to End Violence against Women campaign, kicked off 16 Days of Activism against Gender-Based Violence, a worldwide initiative to bring attention to this important issue. The color orange is used to tie together events throughout the 16 Days of Activism, with advocates being asked to “Orange the World”.

Grassroot Soccer, through the generous support of our donors, including the UN Trust Fund to End Violence Against Women, has taken an active stance against gender-based violence and is implementing programming targeted at breaking down gender norms, encouraging dialogue, building the self-efficacy of girls and young women, engaging young men in critical conversations, creating safe spaces for girls, and changing gender dynamics through sport.

Below is the transcript of Tony Gubesa’s speech. You can view a recorded webcast of the event here and view photos of Tony and GRS at the event here.

Secretary General of United Nations, Your Excellencies, Ladies and Gentlemen:

My name is Tony Gubesa, and I am from South Africa. I am the Site Coordinator for Grassroot Soccer’s Football for Hope Centre in the Khayelitsha Township.

I am honoured to be here, and thankful to the UN Trust Fund to End Violence Against Women for inviting me to speak today, and to “Orange Our World”!

Growing up in the Gugulethu Township during apartheid, I was exposed to violence and discrimination. I didn’t always know where my next meal would come from, or if my grandfather would come home after a long day at work.

Despite all of this, my grandfather was determined to build a family life that was safe and peaceful. He was my greatest role model, and our home was free from the discrimination and violence experienced in the community.

The organisation I work for, Grassroot Soccer, is an adolescent health organisation that empowers young people to make educated choices about their sexual health, and prevent gender-based violence. We deconstruct gender stereotypes, boost confidence and self-esteem for girls, and work toward ending gender-based violence. Using the power of soccer to connect young people with the information and services they need to prosper, our female Coaches deliver dynamic lessons, and provide a safe space to engage girls and break down harmful gender norms.

Our participants are 50% more likely to access HIV counselling and testing, than other adolescents. Our educational soccer leagues empower girls to seek sexual and reproductive health services, and to address gender norms, sexuality and relationship issues with their peers.

With support from the UN Trust Fund to End Violence against Women, Grassroot Soccer is able to empower more young role models and create more safe spaces in our community.

Ladies and gentlemen, I am proud of our role in empowering young women and girls at Grassroot Soccer, because when we empower women, we empower – and ‘Orange’ – the world.