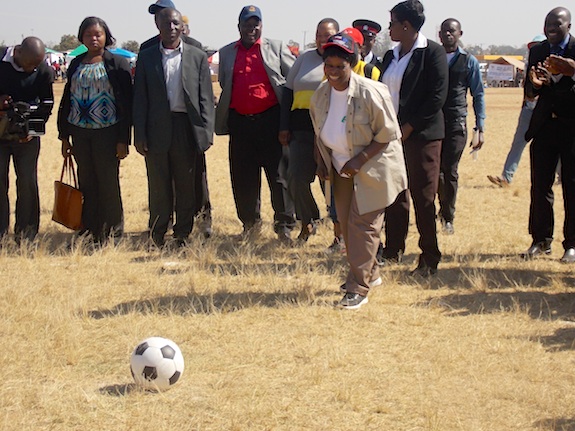 The day’s activities included a GRS-supported four teams tournament, entertainment and a match past. The event was officiated by First Lady Mrs. Esther Lungu, who also officially flagged off the tournament. In her speech Mrs. Lungu praised the government for instigating a mass campaign to increase the services of HIV counselling and testing. She noted that mobile HIV counselling and testing services had been expanded to target hard to reach areas and school going youths. The Zambian First Lady went on to say that VCT is very important as it is the entry point to HIV prevention, care and support.

A number of partners were present to provide various services such as free HIV counselling and testing, family planning, VMMC, cervical cancer screening and other sexual reproductive health services. Mrs. Lungu herself took an HIV test during the day’s events.

Zambia first observed the National Voluntary Counselling and Testing (VCT) Day on June 30 2006.  It was agreed that the day will be recognized annually as it plays an important role in the HIV response and is in line with the global effort to accelerate HIV and AIDS prevention.  Further, VCT is ultimately an entry point to HIV prevention, care and support as well as sexual reproductive health services. When people know their status they will be able to make informed choices on how they can either avoid HIV infection if negative, or live positively if they are positive. The theme for 2015 National VCT Day was “Universal Access to Annual HIV Counselling and Testing” and it serves as a reminder to everyone to ensure that they test for HIV at least once a year.

The Zambia Demographic and Health Survey (ZDHS) 2013- 2014 revealed that 80% of women and 64% of men have ever been tested for HIV and, despite government and non-governmental organizations’ efforts to make HIV Counselling and Testing (HCT) services as widely available as possible with more than 1800 counselling sites in the country, only 46% of women and 36% of men had an HIV test in the last 12 months.

Apart from increasing access to HIV testing services, VCT Day provides a platform for the whole nation, provinces and districts with the opportunity to increase access and awareness to information about prevention measures including:

• Having one sexual partner

• Correct and consistent use of condoms

Most importantly, VCT Day calls for wider partnerships that will involve government leaders, traditional leaders, traditional healers; faith based organizations, civil society, private and public sectors as well as general communities. Grassroot Soccer was proud to play a role in mobilizing the community to get tested.

Grassroot Soccer Joins as Signatory to the Girl Declaration