In commemoration of this year’s World Malaria Day, Grassroot Soccer partner Youth Empowerment and Development Initiative (YEDI), in partnership with Special Olympics Nigeria, organized a community event, the “Kick Against Malaria Football Tournament.” Targeted at combating the scourge of malaria using the power of football as a convening tool, the tournament took place alongside other activities including free malaria testing and treatment, free distribution of long-lasting insecticidal treated nets, a family health forum, a health talk on malaria, and music, among other activities.

Now in its third year, the tournament, a Grassroot Soccer initiative where the power of soccer is used as an effective teaching platform for mobilizing and empowering young Nigerians with relevant information about malaria and HIV/AIDS prevention and treatment, as well as basic life-saving skills, was held at St. Finbarr’s College Akoka Lagos, on Friday May 1st. The program was sponsored by the ExxonMobil Foundation and supported by Coca-Cola.

The event was a big success, with over 2,500 people in attendance. The day was highlighted by soccer matches composed of both Special Olympic athletes and partners from the community. Over 500 people tested for malaria and / or HIV.

The event drew over 2,500 community members!

Malaria is a critical health challenge in Africa. According to the World Health Organization (WHO), 3.2billion people are at risk of the disease, resulting in over 198 million cases of malaria and some 755,000 deaths every year; people living in poor countries are the most vulnerable. The statistics also show that in 2013 alone, an alarming 90% of the world’s malaria deaths occurred in Africa and over 430,000 African children died before their fifth birthdays.

The ExxonMobil Foundation has consistently supported the Grassroot Soccer initiative from inception. This sustained support, as part of the global effort to fight malaria, has yielded (and is still yielding) results. Since 2000 in the WHO African region, the malaria mortality rate has fallen by 54%, and by 47% globally. And since that same year, the ExxonMobil  Foundation has become a leading private investor in malaria, with an investment of over $120 million that has seen the distribution of 13,186,369 bed nets, 1,922,031 doses of anti-malarial drugs and 1,054,165 rapid diagnostic kits. This intervention, which has reached more than 105 million people in Africa and Asia, has also trained 355,484 healthcare workers and counselors. 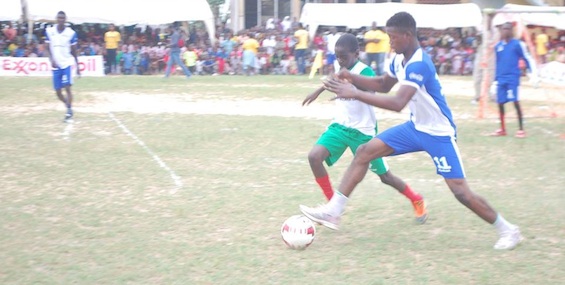 The tournament included a lot of spirited play from all teams.

Established in May 2007 by the 60th session of the World Health Assembly, a decision-making body of WHO, World Malaria Day is an occasion to highlight the need for continued investment and sustained political commitment to support countries in their efforts to control and eliminate malaria as well as provide education and understanding of malaria. On such occasions, well-meaning individuals, multinational organizations, corporations, and grassroots organizations, work together to provide free malaria testing and treatment, awareness and advocacy for policy changes to push back the scourge. The theme for the 2013-2015 campaign is INVEST IN THE FUTURE, DEFEAT MALARIA.

Even though it took off in 2001, Special Olympics Nigeria was formally launched in December 2005. It is an affiliate of Special Olympics International, a global non-profit organization created by the Joseph P. Kennedy foundation. Over the years, the organization has brought Special Olympics opportunities to individuals with intellectual disabilities in Nigeria, an initiative that has helped break the barrier of cultural inhibitions around the issue of intellectual disability in the Nigerian society. They are currently in 25 states in Nigeria, spread across five geo-political zones including South West, South East, South South, North Central and North West. Each year and with the generous sponsorship of Coca-Cola, over 10, 000 children and adults with intellectual disabilities participate freely in year-round training and competition in 7 Olympic Sports. A global leader in the beverage industry, Coca-Cola has been the corporate sponsor of Special Olympics Nigeria, giving a sense of belonging to these individuals with special needs.

Youth Empowerment and Development Initiative (YEDI), with headquarters in Lagos and offices in Akwa Ibom and Ogun, is a Nigerian NGO committed to introducing effective and innovative approaches to mobilizing, educating, empowering and inspiring young people and communities in Nigeria. Through its various programs, YEDI equips young people with basic and relevant life-coping skills, and provides them a platform to have important discussions about life, take guided steps to achieve their goals, stay strong when faced with challenges, and protect themselves and others from diseases such as HIV/AIDS and malaria. With support from its partners, YEDI, through its Grassroot Soccer program, has carried out interventions for more than 40,000 children in over 400 schools in Lagos, Akwa Ibom and Ogun States, with plans to extend operations to Abuja and Rivers State.