“We Need to Cheer Our Home Team Versus HIV and AIDS”

Editor’s Note: We first published this story in March, 2011. Since then, Coach Opo has remained with VAP, and is now the organization’s Monitoring & Evaluation / Logistics Officer. See the end of the story for more on his current work.

Opo works for our partner organization in Kenya, VAP (Vijana Amani Pamoja). Here he shares his inspiring story and why he wants to fight stigma surrounding HIV and AIDS. 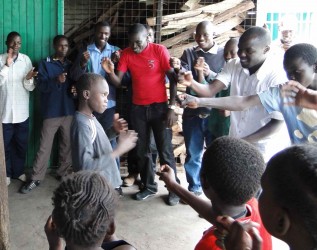 Today I have this chance of reflecting and celebrating the life of the best friend I have ever had, the person who has shaped how I have viewed life since I was a young boy. Even though I did not get the chance to enjoy his company into adulthood the experiences I have had with him gave me a better understanding of what life is and how to relate to other people. These experiences, that I treasure so much, give me the extra energy that I, as a Skillz coach, need when I intervene and advocate for positive behavior change among my friends and young people in my community.

Dave (not real name) was a funny, energetic, and playful friend. He was full of games and he loved football very much. During my school holidays, travelling upcountry was the only thing in my mind. School holidays were the best times in my life, to date. I cannot remember having so much fun since those days—and the star of the show was Dave. Dave’s parents died when he was still a little boy. As I knew it then, his parents died from “the wrath of a strong wind” wiping out the entire village, they called the wind “Ayaki Matieka,” a Luo word for “the wind that finishes.” After his parents died, he was put under the custody of his uncle. We nicknamed Dave “Rivaldo,” a Legend of Brazilian and world soccer. Dave admired Rivaldo so much that whenever he scored a goal during our ‘World Cup’ (we had a rusty metal tea cup as our world cup trophy!) he ran all over the home with his shirt covering his face just as the Brazilian Rivaldo did whenever he scored.

We used to chase each other in the banana plantation as we kicked the banana trees pretending that they were our enemies. We admired the Kung-Fu masters from those Japanese films and we loved how they fought off their enemies with their special fighting styles—our favorite being the “Drunken Master” style. We pretended we were drunk and staggered as we walked like a drunkard and we threw kicks to the helpless banana trees. It was so much fun and we used to come home later from the “battle” at the banana plantation, with our feet hurting so badly!

Dave’s aunt was not kind to him. She used to beat him up for mistakes that were petty. I can’t forget the cries of pain when he was being beaten and he was always given very heavy and odd jobs to do. Despite Dave being sick (we were told that we were not supposed to be too close to him or share our food with him) I never, at any time, saw his aunt take him to hospital or see him take medicine. Even though Dave was performing well in school his parents decided to take him out of school—this I never understood. Despite all this harsh treatment he was undergoing, Dave still found the strength to make jokes and have fun. He still could play football with us and score goals with his powerful left foot that always brought our goal post down.

During my subsequent holiday visit, Dave’s health started to deteriorate, he became weak and he was always coughing so much that he even strained to breath. During this time, we were being told not to be near him and when we were seen around him we were punished. I couldn’t understand why they didn’t want us to be near him. Dave was our Hero. He was our Leader. He was our best friend and we were not asking for too much. We only wanted to be in his company. Dave died a painful death and even though his death didn’t mean much to many people, it was everything to us, his friends. Fun was no more, only memories of it.

To date, there is not one person who can convince me that it is the AIDS virus that killed Dave. Dave died as a result of the treatment he was subjected to by the people who were responsible for taking care of him—the society. If only we would all have shown real love to him, Dave would have lived long enough to see Brazil lift another World Cup. Rivaldo, his favorite player, was in the 2002 squad. What a joy that would have been for him.

We need not stigmatize our own people living with HIV: we are part of them, they are part of us and we can never live apart. They are human. We are human. We need not be inhuman to them. We  are not immune from HIV. Some are born with the virus, some cannot escape its clutches, and the rest only need to make one misguided choice and we could also be infected. Though Dave was infected with HIV, I have been affected by it up to today as I have lost one of my best friends. We are neither far from being infected with HIV nor are we far from death. We all die eventually and it doesn’t matter whether you are HIV positive or not. The best we can do is support those who are positive as they battle with the virus. They are on our team and we need to put on our “Makarapas” and prepare our ”vuvuzelas” to go to the stadium of Humanity and cheer our home team versus HIV & AIDS. Neither can the virus stand the sound of the vuvuzelas of love we are blowing, nor can it defeat our team if we all come to the stadium. And if anyone asks you why we need to do this, pause for a moment and reply… WE ALL HAVE DREAMS TO ACHIEVE, WE ALL WANT TO REACH OUR FULL POTENTIAL, WE ALL NEED EACH OTHER, WE ALL NEED TO BE APPRECIATED AS WE ARE AND WE NEED CARE FOR PEOPLE LIVING WITH HIV BECAUSE IT IS IN OUR HUMAN NATURE TO CARE FOR EACH OTHER.

The only way we can stop stigmatization of people living with HIV/AIDS is to encourage those among us who have been able to bounce back and became successful in life despite being HIV-positive to come out of hiding and dispel the fear that there is no life but death after being infected. Let them appear and be a source of inspiration to those who have tested positive and have lost hope in life. PLWHA also need role models among them and when the world will realize that life—not death!–can come out of us after testing positive, the stigma subjected to our own people living with HIV will be reduced. We can do it. We have the power to do so. It is within our reach.

Dedicated to my friends and our people living with HIV/AIDS

Here’s an update from Opo on what he’s  been accomplishing within VAP in the last three years since we originally published this story. In that time he’s been focusing on advancing the organization’s Monitoring and Evaluation capabilities:

“Research, Monitoring and Evaluation has been one of the key systems that has played an important role in ensuring we achieve the best results and has been crucial in ensuring that we are on track in terms of activities we conduct, how we conduct them and their timing. It is with no doubt that Skillz Kenya is one of the best well-received and responded-to HIV/AIDS prevention program among Adolescent youths and Young Adults within Nairobi. Our M&E system has largely been used in planning and designing implementation of our programs and our M&E reports have been used in making key strategic programmatic decisions that help us work towards getting better impact results.

GRS M&E team has been our mentor and our relationship can be likened to athletics where the speed of the race will be determined by the speed a of the athlete in front, VAP M&E is fast growing because the GRS M&E team is setting a good pace and we are set to break records at this speed in years to come.”