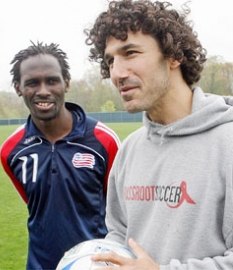 Ethan Zohn with a member of the New England Revolution in 2008.

The United States Soccer Foundation is celebrating its 20th Anniversary in 2014 with a year-long campaign entitled “Together, We Are Soccer”. As part of this campaign, the Foundation chose 20 individuals to profile who have made a significant impact on the game of soccer or who have been impacted by soccer in a positive way. Grassroot Soccer co-founder Ethan Zohn was chosen as one of the 20. His story, in which he describes his beginnings in the game, what the game has taught him, and how GRS is using the game to change the lives of young people, is featured this week. You can view the full profile here: http://togetherwearesoccer.org/our-game-our-stories/