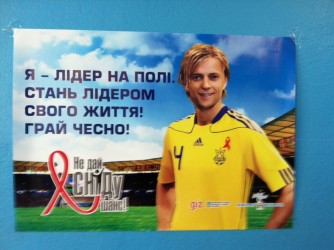 Ukrainian professional footballer Anatoliy Tymoshchuk appears in a poster as part of the Fair Play campaign.

Grassroot Soccer is pleased to announce an exciting new project that has just been launched in Ukraine. Ukraine has the highest rates of HIV/AIDS in Europe and the epidemic continues to grow, particularly among the youth population. Thanks to support from the Elton John AIDS Foundation, GRS will work with the Deutsche Gesellschaft für Internationale Zusammenarbeit (GIZ), Peace Corps Ukraine, and various other local partners to deliver HIV prevention education, testing, and support to thousands of Ukrainian youth. 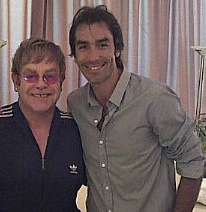 GRS  and the GIZ will provide technical and financial support to the Ukrainian government’s Fair Play project, which will train close to 400 physical education teachers to deliver HIV and healthy lifestyle education to more than 30,000 Ukrainian school children over the next 18 months. We will also work with local organizations to provide HIV testing, prevention, and support services to at-risk youth through holiday camps and VCT soccer tournaments.

The project was officially announced at a free concert promoting AIDS awareness featuring Elton John, held in the Ukrainian city of Kiev, the night before the finals of the 2012 European Championships. Grassroot Soccer Ambassador Robert Pirès attended the event in support of the initiative.

For more information about the response to AIDS in the Ukraine, and how the Ukraine factors in to the broader response in Eastern Europe, see this article from UNAIDS, featuring GRS Global Board member  and UNAIDS Executive Director. Michel Sidibé