Saint Anselm men’s soccer player Justin Colella has more on his mind than the game he plays. The game of soccer brings him enjoyment, but it’s the bigger picture that gets him going. Every time Colella and his teammates took the field last season, they played for that bigger picture: they played to help conquer AIDS. 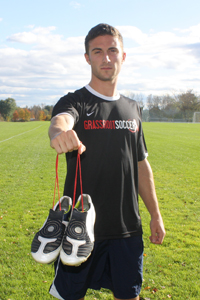 Colella’s involvement with the fight against AIDS began in the spring of 2010 at a Student-Athlete Advisory Committee (SAAC) meeting. He proposed his fundraising idea, which he called “Goals for Grassroots.” “Goals for Grassroots is a fundraising campaign to raise awareness and funding for a non-profit organization called Grassroot Soccer,” explained Colella. “It’s an interesting and competitive way to raise money for a good cause through direct success from the team’s performance. It increases interest in the non-profit organization and the team as well.”

The original goal of Colella’s program was to raise $1,000. His campaign successfully accomplished its goal by raising over $1,200 for Grassroot Soccer. “Besides the funding, it is also my goal to get other sports at the school to get involved; maybe not with this program, but to start their own, and do something with their own sport, like we’re doing with soccer. Maybe this will spread to other schools as well.”

Colella said the research he did when deciding what to choose for this community service fundraiser was eye-opening and very rewarding. “Doing a particular program encompasses what being an athlete, student, and good philanthropist means.”

“Coming from where I grew up (Wilmington Mass.), I didn’t know anyone with AIDS, so it never really hit home for me; however, I quickly learned about the global presence of this lethal disease. I have always taken note of how the public and media promote AIDS awareness. Like I said, I have not been affected personally, but I have seen how it affects soccer around the globe.”

The way Colella mapped out the campaign’s success was quite interesting. In what is known as the “Grassroots Participation,” for every goal the team scored that year, every player and coach on the team would donate one dollar to the program. In addition to the money that is raised from the goals, for every win and shutout the team records, all of the team members and coaches would donate one dollar to the program.

Justin steps on to the field every day to play for his school. He plays for pride, and for his team, and now much more than that. “Goals for Grassroots has had a big impact on me off the field for personal reasons,” explains Colella. “I don’t think about it every minute, but different things remind me of it. It makes me feel like I am doing something for a greater good, fighting this lethal disease.”