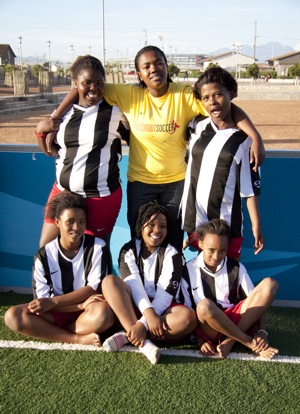 Building on their successful partnership in Zambia, Grassroot Soccer and the Elton John AIDS Foundation (EJAF) will work begin working together in 2011 to bring Skillz Street, a girls-targeted intervention, to South Africa. With the development of the partnership, over a one-year period Grassroot Soccer hopes to train 45 new coaches, deliver the new intervention to 2,400 female adolescents, and test up to 2,240 individuals.

Grassroot Soccer will use the £100,000 granted by EJAF to work with young females in grades 7-9 in the following townships: Khayelitsha and Gugulethu (Cape Town), Soweto (Johannesburg), Zwide, New Brighton, and Motherwell (Port Elizabeth). Led by Grassroot Soccer’s community role models, Skillz Coaches, and enhanced by the unique culture developed within Skillz programs, this girls-centered initiative creates a safe space for adolescent girls to play non-competitive soccer, take action in their community, and have vital conversations about HIV and AIDS. By integrating HIV Counseling and Testing (HCT) into the Skillz Street program, Grassroot Soccer will contribute towards the objectives of SANAC’s recently launched HCT campaign, which aims to test more than 15 million South Africans by June 2011.

In South Africa a young woman is four times more likely to be HIV-positive than a young man. Within the South African Football Association – the sixth largest football association on the planet – fewer than 1% of registered players are female. The need for programs that speak directly to females, create safe spaces, and provide HIV knowledge and life skills, is urgent. Thanks to the continued generous support of EJAF, Grassroot Soccer looks forward to addressing this need with their new program, Skillz Street.