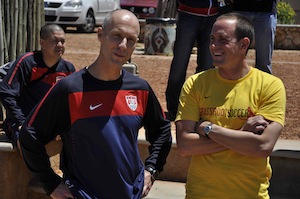 Sunday 14th November, GRS, Western Cape was very excited to host the United States Men’s National team at the Football for Hope Center before their International Friendly against Bafana Bafana on the 17th. The team, led by Coach Bob Bradley, spent two hours immersing themselves in the GRS culture of Kilos, singing and SKILLZ curriculum.

After touring the center and listening to Executive Director of Africa and Co-Founder, Kirk Friedrich, talk about GRS’ values and mission, the team hit the field to participate in well-known SKILLZ practices. Coach Tsokolo “Lucky” Moahloli guided them through the activities, “Risk Field” and “Find the Ball,” showing the team the value of GRS’ SKILLZ curriculum.

Important World Cup contributors, Robbie Findley and Jonathan Bornstein, engaged in both practices, enjoying their time spent with the children. Afterwards, Bob Bradley and the team signed T-shirts and Vuvuzelas for the children and watched the Football for Hope Center’s community league. 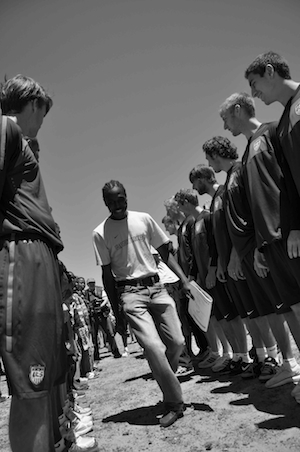 A Grassroot Soccer Coach explains the rules of "Find the Ball" to the US Men's National Team.

According to the  US Men’s National Team blog, “It’s an incredibly special experience to be able to spend time with these kids,” said U.S. defender Jonathan Bornstein.  “The disease is such a huge problem in this country, so it’s very important that people are educated about the risks and the right behavior. They have so little here, so it’s great to see the looks on their faces and think that you are making a difference in their lives.”

Tommy Clark, CEO and Founder of Grassroot Soccer added, “To have the US National team join us at the Football for Hope Center in Khayelitsha is very exciting for GRS and the children of our programs. The kids look up to them as role models, so it’s incredibly valuable to have them interact with them through our curriculum.”

The GRS family and Khayelitsha enjoyed the day spent with the US Men’s National team, in large part due to the team’s energy and interest in the SKILLZ curriculum. The GRS family sends a HUGE KILO and good luck to the team for their game against Bafana Bafana!