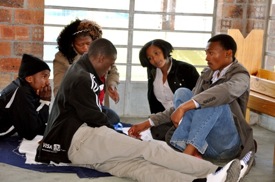 September 6, 2010 marked the launch of Grassroot Soccer’s newest project, Generation Skillz, in Cape Town, South Africa.  Designed for older participants, aged 15-19, the Generation Skillz curriculum addresses four key risk-drivers of the HIV epidemic: multiple partners, intergenerational/transactional sex, alcohol abuse, and gender-based violence.  Responding to the disproportionately high prevalence of HIV amongst young girls and new research that shows that one in seven new HIV infections could be prevented if women were not subjected to physical or sexual abuse, this bold new curriculum aims to use soccer to spark vital conversations that challenge gender norms and address the difficulties facing teenage youth in South Africa.

By focusing on older sub-Saharan youth, the GRS Research and Development team has designed its most advanced and integrated health education program yet. In designing Generation Skillz, the R&D team worked extensively with its Research Advisory Council, comprised of global leaders in public health, research, and sport. Whereas the current Skillz curriculum, Skillz Core, was primarily focused on educating children aged 12-14 about HIV risk, life skills and stigma, Generation Skillz will target high school students, digging deeper on four key risk-drivers of the HIV/AIDS epidemic.  GRS aims to create ‘vital conversations’, a running dialogue between participants that will directly address the challenges facing teenage youth in southern Africa. Generation Skillz is innovative, bold, and is expected to bring Grassroot Soccer, its coaches, and its students to a new level of understanding. 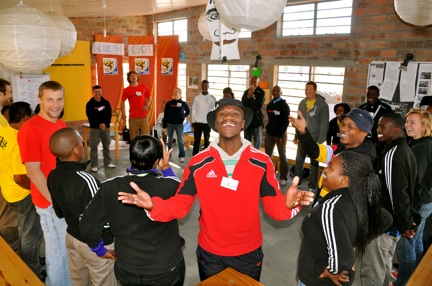 With support from USAID, Comic Relief, MAC AIDS, and the Elton John AIDS Foundation, GRS will deliver the Generation Skillz program across South Africa through 2011, in preparation for rigorous evaluation in 2012.  GRS aims to conduct the first randomized controlled trial in the sport for development field, in partnership with the London School of Hygiene and Tropical Medicine and local research partner, the University of the Witswatersrand, to assess the effectiveness and impact of the program.

Generation Skillz encourages South African teenagers to dive deeper and think about and discuss the issues that they are forced to face every single day. A 2008 national health survey found that more than 1 in 4 sexually active girls in South Africa (15-19 years) have a much older sexual partner and that nearly 1 in 3 males had multiple partners in the past 12 months. Alcohol fuels multiple partnerships and unprotected sex, and, according to the 2009 National Communications Survey, nearly 1 in 5 men report drinking heavily (5 or more drinks) almost every week. Moreover, a Medical Research Council survey found that 28% of South African men disclosed having ever raped a woman – the vast majority began by the age of twenty – and that nearly half reported having ever perpetrated domestic violence. Generation Skillz provides an avenue for teenagers to talk about these issues and to recognize how mobilizing their generation against key challenges, can give them, their peers, their community, and South Africa the power to fight the HIV/AIDS epidemic. 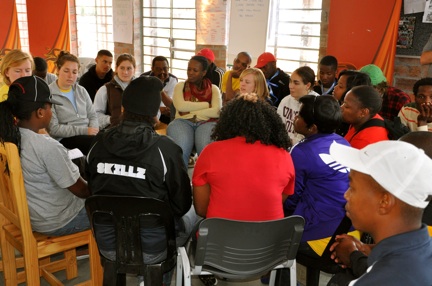 Coaches participate in "Gender Stadium," a Skillz activity that encourages the discussion of gender issues.

PUTTING A FACE TO GRS’ IMPACT IN MALAWI