PUTTING A FACE TO GRS’ IMPACT IN MALAWI 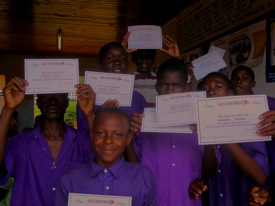 In 2008, Grassroot Soccer began a partnership with the Baylor College of Medicine’s Children’s Foundation and the Abbott Fund in Lilongwe, Malawi. This innovative program goes beyond delivering the GRS HIV prevention curriculum with youth, providing integrated HIV testing to all participants and their families. The program has expanded rapidly since 2008, graduating over 1,500 children and testing over 2000 youth and community members through home-based testing and record-breaking community testing tournaments.

Tsalani’s story, below, provides a window into the pain and loss that HIV has inflicted on the life of a young boy in Malawi.  GRS has played a major role in helping him to find his voice and share what he has learned with others.  “Every time I share my story, I may be saving someone’s life,” Tsalani states with confidence.

Walking to school in his usual manner, Tsalani looked down at the road in silence, holding a distant gaze.  At only 12 years old, he didn’t know how to confront his feelings after the death of his brother.  He felt guilty for not doing more to help and angry that his community failed to lend any support when they needed it most. On that day, Tsalani recalls, “I felt completely alone.”  His brother had been his parent, caretaker, and best friend.

Living by themselves, the two brothers had been forced to take on adult responsibilities early in life.  Tsalani’s 18-year-old brother did everything he could to provide for himself and his brother, but the pressure was overwhelming, and soon his late nights working to raise funds for Tsalani’s school fees became filled with drugs, alcohol and women.

Tsalani did everything he could to stop his brother’s new behavior but he couldn’t reach him.  Desperate, he turned to his brother’s two best friends for help and vividly remembers their answer; “Tsalani, we gave up on helping your brother a long time ago. In this community, you cannot do what he has been doing and get away with it. All we have left to do is pray for him.”  He sought help from other community members but the answer was the same. Soon, Tsalani’s brother became sick, and the entire community seemed to think he was already gone.

As his brother became sicker, Tsalani spent some of the hardest days of his life watching after his brother.  He rarely attended school and sat alongside his brother almost every night as his health declined. He tried to get his brother to go to a hospital, but he refused.  The shame was too great.  After six months, his brother died.

The months following his brother’s death were full of heartache and worry. As Tsalani explains, “I had to start thinking about my future because I had no one to look after me”.  When Tsalani visited the village to shop for food, he heard whispers of “HIV/AIDS” from community members.  Tsalani knew of the virus but didn’t realize for many months that it had been his brother’s killer. 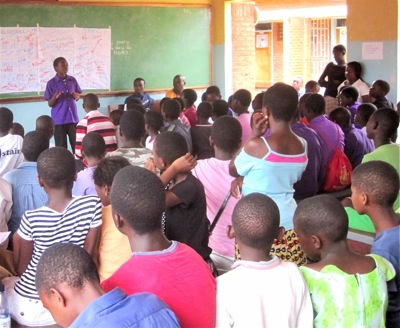 Eventually, Tsalani found relatives to live with and returned to school, but the pain remained until he met Felix Kayira.  Felix was part of an HIV and AIDS education program with an organization called Grassroot Soccer. With the memory of his brother ingrained in his mind, Tsalani had not forgotten about the dangers of HIV and AIDS, and he joined GRS.  Felix remembers those early days with a smile, remarking that, “Tsalani became a man on a mission. The more information I gave him about HIV/AIDS, the more he wanted to know”.

During a practice called “My Coach’s Story,” Tsalani rose to share his personal experience with HIV, and nobody could have imagined the impact his words would have.  As he spoke, every emotion imaginable seemed to emanate from his body, describing the death of his brother. After he finished his story he exhaled, and as the air left his lungs, a new, determined young man emerged.

Tsalani found inspiration in that moment to continue to tell his story and has shared it openly with friends, community members and other GRS participants.   It’s impossible to know how many lives he has changed, but he is humble and wishes not to be thanked for his openness. All he wants is to keep sharing, because, for Tsalani, “every time I share my story, I may be saving someone’s life.”

This story was told by Tsalani and GRS Malawi Coach Felix and was written by GRS Intern Eren Munir.  GRS is exceedingly grateful to Tsalani and Felix for their candidness and honesty in telling their stories.