Grassroot Soccer’s Football For Hope Centre was featured in a National Public Radio (NPR) Broadcast on July 27, 2010. Click here to listen to the story, or read the full transcript from the broadcast below: 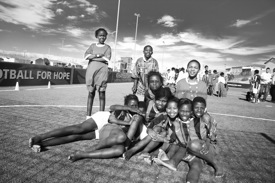 A Skillz Street team poses at the Football For Hope Center in Khayelitsha, South Africa.

Some of the record $3 billion brought in by the 2010 World Cup is helping fund a program to develop soccer in Africa. But FIFA, the organization that governs world soccer, hasn’t managed to deliver fully on its pledge.

Each of the 20 centers FIFA has committed to build — as part of its pledge to create a positive legacy for the World Cup — must include a soccer field, an educational space and a health care facility. The first Football for Hope Center was completed in Khayelitsha last year.

On the eastern edge of Cape Town, Khayelitsha is one of the largest and most dangerous townships in South Africa. On a recent day, the roads hum with the sound of minibuses and street vendors; a group of men on the sidewalk chant a traditional Xhosa song.

At the center, a group of girls play soccer and learn about the dangers of HIV and AIDS, through a program run by Grassroot Soccer. The bright green field and the girls’ multicolored uniforms contrast sharply with the backdrop of brown gravel and wooden shanties.

Lunga Sidzumo, a community project coordinator at the center, says the facility is making a huge difference in the community.

“For the kids, it’s a blessing for them,” says Sidzumo, who grew up in Khayelitsha. “If ever we don’t have any event, they will be coming and nagging us, pushing us and arguing that, ‘Why there is nothing happening in the center?’ “

Lungsi Jere, a local coach, says she also believes the facility is having a positive effect.

“It’s really changed so many kids’ lives,” Jere says. “There are kids who’ve chosen to play sport at the early age, because I think it just takes them from negative things out there.”

But while FIFA has heavily advertised its 20 Centers for 2010 campaign, it hasn’t advertised the fact that just four facilities like the one in Khayelitsha have actually been built, and only four more are under construction.

FIFA’s head of corporate social responsibility, Federico Addiechi, says from Johannesburg that the organization has encountered some challenges, but he insists that the project is on time.

“The project was, from the very beginning, not supposed to end in 2010,” Addiechi says. “The goal … was the end of 2012, and we are probably three or four months behind schedule, but we are doing well.”

While the 20 Centers project has received a lot of attention, the total cost of the centers will be roughly one-third of 1 percent of the revenues from the 2010 World Cup — around $10 million.

And FIFA isn’t running these facilities after they are built. Kirk Friedrich, the managing director of Grassroot Soccer, says finding groups to administer the centers hasn’t been easy.

“There aren’t many organizations out there that are using football as a tool for social development and also have experience running youth centers,” Friedrich says. “It takes a bit of experience, it takes a bit of practice to know how to do it correctly. So it’s not easy.”

Despite these setbacks, Addiechi claims that FIFA is a trendsetter in the effort to use soccer as a tool for social development.

“We are the first international sports federation to have established, back in 2005, a dedicated unit to social responsibility,” he says. “You will not find this in the sports world.”

Back in Khayelitsha, a group of children gather around the field, waiting their turn to play. Kanya Moussa is a 6-year-old who lives up the street.

Asked if he comes to the center to play soccer, Moussa says, “Every day. We learn about good things; we learn about HIV and AIDS.”

“My favorite player is Tshabalala — Siphiwe Tshabalala from Bafana Bafana. I like the way he plays, his styles,” she says.

For many of these kids, soccer is providing a pathway to education and a healthier life. Having seen the World Cup in their own backyard, it is also providing them with big dreams.