The following is an article published 9 July, 2010 by Austin Merrill on VanityFair.com. 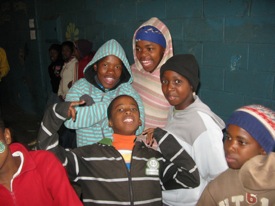 Perie Zabathempu has begun her weeks during the World Cup by reciting a Monday-morning story to groups of children in their early teens who live in the shantytowns that fringe Port Elizabeth, in South Africa. It’s a different group of kids each week, but the story she tells is always the same. “In 2001, I got sick,” Perie says, “but I didn’t know why.”

Perie is in her thirties and has a kind and lovely face. She tends to squint ever so slightly when in conversations or when talking to a group, as if she is listening with her eyes all the while. She has told her story many times and she gets through it confidently, without so much as a shudder. But she tells it softly, too, and the children trust her right away.

“It turned out I was HIV-positive,” she tells them. “But I am surviving. I have a son and that’s what makes me strong. I want to live for him.”

I met Perie on a cold and wet Wednesday in June. I had taken a break from the soccer that had brought me to South Africa and was spending the day at the Molefu Primary School in New Brighton, a poor neighborhood just north of Port Elizabeth’s city center, not far from the new Nelson Mandela Bay Stadium, the site of eight World Cup matches. A strip of industrial warehouses stands between New Brighton and the Indian Ocean; the residential blocks are gray and low-slung and stretch on for miles. It is nothing like Summerstrand, the posh beachside community where my guesthouse was located on the other side of town, near the golf course and the university.

During the World Cup the Molefu Primary School has been taken over by Grassroot Soccer, a nonprofit organization that uses soccer to help children fight HIV and AIDS across southern Africa. Every Monday a new group of fifty or so kids arrived to spend the week with counselors and soccer coaches. The children spent their mornings taking part in educational activities focusing on HIV and AIDS, then after lunch they split into co-ed teams to play some soccer.

“We deliberately make the soccer just for fun,” Mpumi Lallie, one of the Grassroot Soccer organizers and a colleague of Perie’s, told me. “Kids learn better when they’re enjoying what they’re doing.”

Health workers in South Africa—home to nearly six million HIV-infected people, more than any other country in the world—have been counting on the World Cup in their fight against HIV and AIDS. “One of the legacies that we’re hoping will take root is better health and prosperity for the entire continent,” said Brian Suskiewicz, an American doing volunteer work in southern Africa for Coaches Across Continents and WhizzKids United, two groups doing work similar to Grassroot Soccer. “The World Cup has focused attention on HIV/AIDS awareness, and that’s a great thing.”

At the primary school I joined Perie in a classroom where 15 children went through a series of activities designed both to demonstrate how HIV/AIDS is spread and to lessen the stigma that comes with the disease. Some of the activities were games that had the room ringing with laughter; others left the kids holding onto each other as they choked back tears. Not everything was about AIDS—the leaders tried to encourage the children to talk about any troubles they were having. At one point a boy, maybe 15 years old, walked to the front of the classroom, pulled a piece of paper from his pocket, and read aloud about his struggles to deal with an adult in his home who routinely forced him to do drugs and drink alcohol. He read the note quietly and went back to his seat, where he was comforted by several of the others.

“We mix the serious with the fun,” said Perie. “Some of these kids have lost parents from HIV, some have been sexually abused, some arrive with empty stomachs. They open up and it gets very deep. We want to teach them that life is full of challenges, and they must expect that as they grow up.”

By starting off the week with their own personal stories, Perie and the other counselors hoped to show the kids that it’s okay to be vulnerable and show emotion. “I want to be honest with the kids so they can be open and honest with me,” she said. “They learn to trust and support each other.”

Sivuyile, a 16 year-old boy, told me that his father had recently suffered a stroke and that he and his six siblings got by on government hand-outs. “Dad was the bread-winner, and now nobody brings home any food,” he said. “It was good to open up about what’s happened to my family. And it helped me learn that if someone has HIV I must not discriminate against them. I must love and support them.”

As part of their plan to mix the fun and the serious, Grassroot Soccer had bought tickets for all the kids in the program to a World Cup match in Port Elizabeth for later that week. Sivuyile smiled when I asked him what he thought about the tournament being hosted in his country. “I feel happy,” he said. “I hope South Africa will win.”

It was raining after lunch, but the kids were not about to let that get in the way of their soccer games. They gathered under a covered pavilion, set up miniature goal posts, and played for nearly two hours on bricked-over concrete.

When the games finally ended I gathered my things and got ready to leave. But Perie motioned for me to wait. The children weren’t done quite yet. They came together, formed a circle, and then they began to sing.

Thankfully, I had a video camera. [Click to see video]