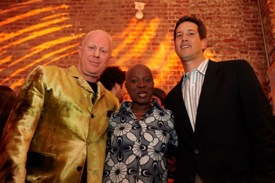 On May 12, 2010, ESPN brought the global soccer community together at a private event to celebrate the 2010 FIFA World Cup and to raise funds for GRS.  The event showcased 32 murals, commissioned by ESPN in promotion of the 2010 World Cup, and painted by a collection of Cape Town artists in South African graffiti style. The murals will appear in publications and on subway platforms and billboards in New York, Los Angeles, Chicago, and elsewhere from now through mid-July.  Featuring a performance by Grammy-award winner, Angelique Kidjo, the event raised over $25,000 for GRS’ HIV prevention programs in South Africa.

The following article featured in Vanity Fair on May 14, 2010.

Angelique Kidjo and ESPN teamed up in Manhattan on Wednesday night to celebrate the upcoming World Cup and to raise money for Grassroot Soccer, a nonprofit group that educates children in Africa about HIV prevention. Kidjo, winner of a Grammy in 2007 for Djin Djin, her 10th album, sang for about 45 minutes, her mesmerizing siren voice like a force of nature that warmed up the city on a raw, damp night.

The event was the latest demonstration of how this year’s World Cup will be used by many to promote positive change in Africa, at a time when the continent will be the center of the planet’s attention more than ever before. South Africa, the tournament’s host, is home to more HIV-infected people—estimated at nearly six million—than any other country in the world, and Grassroot Soccer is hoping to use the World Cup to bring in funds to help fight the spread of the disease.

Like many others, I’m worried about the long-term economic impact that the World Cup will have on South Africa. The country is spending an estimated $5 billion on the tournament—an investment that may quickly become a burden once the games are over. But thankfully some organizations, like Grassroot Soccer, have forgone complaints about how that money could have been better spent. Instead, they’re focused on using the World Cup as an opportunity for exposure.

“The World Cup is about a lot more than soccer,” Sal Masekela told me. Masekela, the action sports enthusiast and son of Hugh Masekela, the great South African jazz musician, will be working as a cultural correspondent for ESPN during the tournament. “The work that Grassroot Soccer is doing against HIV is incredible. People talk about cure, cure, cure. Medicine, medicine, medicine. But education is the key. Grassroot Soccer is using the sport to formulate the building blocks for kids’ lives. The only thing missing for these kids is opportunity and education. Soccer is now so much more than a game for these kids.”

Near the end of Angelique Kidjo’s set, I spoke to Bill Miles, the chief operating officer of Grassroot Soccer. “This is about the coming together of the global soccer community—Major League Soccer, FIFA, Women’s Professional Soccer, ESPN—to celebrate our work in South Africa against HIV,” Miles told me. Grassroot Soccer, founded in 2002, has already put 320,000 kids through its HIV education program, he said. Its goal is to reach one million children by the 2014 World Cup, which will be hosted by Brazil. Before Kidjo’s performance, Masekela had presented Miles with a check from ESPN for $20,000. Add that to the money given by the over 300 invited guests—the suggested donation per person was $100—and Grassroot Soccer pulled in about $50,000 for the event, enough to put about 2,000 more kids through its program.

Miles invited me to join him for a tour of one of Grassroot Soccer’s facilities while I’m in South Africa for the tournament. “Come spend a day with us,” he said. “I think you’ll be amazed at how these kids’ lives are changed. Then we can watch one of the World Cup games that night.”

I think I’ll take him up on his offer.

REACHING HUNDREDS OF THOUSANDS DURING THE WORLD CUP