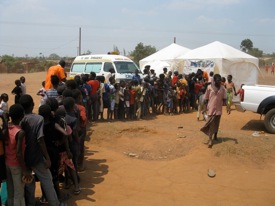 Hundreds of people lined up in order to get tested for HIV. A total of 716 Zambians were tested, 87 of those under the age of 16.

On Saturday, October 31st, over three thousand community members converged on Bauleni Basic School grounds in Lusaka where Grassroot Soccer Zambia held its second Voluntary Counseling and Testing football tourney of 2009, made possible by Barclays Spaces for Sports.  Amidst a fun-filled day complete with football, drumming, dancing, and musical performances, enormous steps were taken to overcome the stigma associated with HIV testing, and 716 members of the community were tested for HIV!

The compound of Bauleni was chosen for its tight-knit community, its minimal but growing exposure to GRS programs, and the strong presence of GRS partner Bauleni United Sports Academy (BUSA).  BUSA’s group of joint BUSA and GRS coaches were instrumental in performing community outreach, sensitizing the community with HIV/AIDS information and encouraging the unprecedented community participation at the event.

The tournament began in the early morning, with few attendees other than the football players and a few groups of curious Zambian youngsters.  A slow trickle of people quickly increased to a steady stream when GRS Zam’s partner organization Barefeet Theatre Group began beating their drums and performing traditional Zambian dances.  By the time the popular Zambian music group The Third performed around midday, there was a massive crowd of young and old singing, dancing, and watching football together.

Voluntary counseling and testing activities were handled expertly by GRS Zambia’s testing and treatment partners LatKings, Newstart, Center for Infectious Disease Research Zambia (CIDRZ), Bauleni Community Clinic, Tiny Tim’s and Planned Parenthood Association Zambia (PPAZ).  GRS and its partners set out with the goal of matching the testing totals of their previous tournament, considered a lofty target since the community where the prior tournament was held, Kalingalinga, is far larger than Bauleni.  To everyone’s delight, the record of 573 tested in Kalingalinga was easily surpassed, with a total of 716 tested. 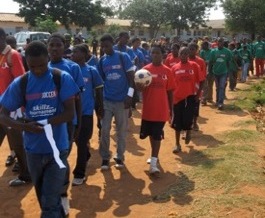 Teams arrive for the VCT tournament at the Bauleni Basic School in Lusaka, Zambia.

Most inspirationally, the largest demographic tested was adolescents eager to learn their status and live HIV free lives.  Additionally, 87 youths under 16 years of age (as young as 3 or 4), encouraged by Zambian reggae artist and activist Maiko Zulu, ran home with parental consent forms, and then excitedly returned for testing with their parents, signed forms firmly in hand.  The eagerness demonstrated by young Zambians to receive VCT provides a hope for the future—the hope that a new generation of Zambians will emerge equipped with the knowledge and courage to defeat HIV and AIDS in Zambia for good.

The tournament would not have been possible without the support of Barclays Bank, Dapeg, Manzi Water, National Milling, O’Hagan’s, Rhapsody’s, and Spar.  Additionally, GRS would like to extend their utmost thanks to the Skillz coaches and testing partners whose time, expertise and passion was vital to the success of the tournament.