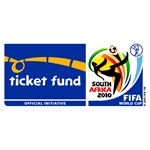 In total, 120,000 complimentary category 4 tickets will be allocated to South Africans involved directly with the 2010 FIFA World Cup and in worthy social and development initiatives linked to the tournament. It is a unique initiative in the 80-year history of the FIFA World Cup.

The tickets will be issued as a reward for thousands of South Africans, particularly the country’s youth, who are involved in existing programmes aimed at encouraging participation in football and community-oriented initiatives and will act as a catalyst for the establishment of sustainable social and human development programmes using the game of football.

The Ticket Fund goes beyond offering the chance to attend one of the 64 FIFA World Cup matches. The programmes range from making children and young adults aware of health issues, to equipping people with the necessary skills to better manage their lives through inspiring financial literacy, to raising awareness of the need to protect the environment to score “green goals”.

“The Ticket Fund aims to use the excitement and passion for the game in the country as a tool to motivate and engage people, particularly young South Africans, on topics such as education, health and the environment,” said the FIFA President, who in September 2008 nominated about 20,000 construction workers as the first beneficiaries of the Ticket Fund. Each worker will receive two tickets for a group stage match at the venue that they helped to build.

Crucially, the Ticket Fund initiative will not end when the final whistle is blown on 11 July 2010. This will mark only the beginning of long-term partnerships that will continue to create opportunities for South Africans for years to come.

“There is a massive global demand for tickets to the tournament, but we are doing all we can to ensure South African residents are well represented in the stadiums with their unique vibrancy and spirit. It also shows appreciation for the critical role played by the thousands of construction workers, whose skill and dedication has made this project a vivid reality,” said Danny Jordaan, CEO of the 2010 Organising Committee.

At today’s media briefing with Danny Jordaan at Walter Sisulu Square in Kliptown, Soweto, the focus was on projects supported by the six FIFA Partners (adidas, Coca-Cola, Emirates, Hyundai/Kia, Sony and Visa) through which 80,000 FIFA World Cup tickets will be assigned.