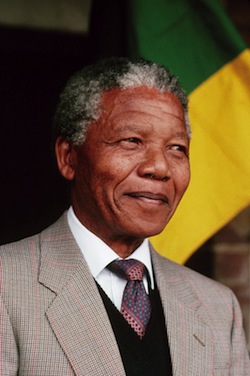 Across Grassroot Soccer we have been mourning the recent passing of Nelson Mandela, and celebrating the life and impact of the man known to many as ‘Madiba’. His spirit lives on in the work we do every day and in the outlook of the young people we engage with. Below is a cross-section of thoughts from across the GRS family on what Mandela means to each of us and what he means to Grassroot Soccer.

We also encourage you to read our Global Board member Jonathan Klein’s remembrance on what he learned from Nelson Mandela.

“Mandela’s legacy means that I can go to school for free. And without him fighting for our freedom, I would be forced to speak in Afrikaans.” ~ Annie Shongwe, Community Program Coordinator, Soweto, South Africa

“In my formative years as a young adult, I had three role models…all of whom helped shape the fact that the primary focus of my life’s work has been in the not-for-profit world and in some way or another has focused on youth. Those role models were John F. Kennedy, Martin Luther King, Jr and Nelson Mandela.” ~ David Harrison, Administrative Assistant, U.S.

“Nelson Mandela stands for so many things that each one of us should embody. Above all for me and in particular for our work at GRS, he reminded us often that he is not a saint, not a holy soul nor something else ‘unattainable’ to each of us. But rather he was an ordinary man who simply refused to give up in the fight to achieve what is right, what is good and what is just. Each one of us can do the same and contribute to achieving the impossible. Perhaps even an HIV/AIDS free generation. Hamba Kakuhle Tata.” ~ Brendon Foster, Director of People Operations, based in Cape Town, South Africa

“Mandela has taught me to stand up for what I believe in, no matter the cost. Being true to yourself and your vision of the future is of the utmost importance. And small victories lead to larger ones with dedication and perseverance.” ~ Sarah Moran, Programs Intern, Soweto, South Africa

“Mandela provided inspiration and hope for South Africa’s future in the sense that people can feel liberated and free to express whatever they want to say and live equally in spite of race. Be human, care, think before you do, and act in the best interest of the country, that was Mandela’s legacy.” ~ George Tsoari, Program Coordinator, Soweto, South Africa

“Mandela has inspired a nation and taught us that where there is a will, there is a way. Grassroot Soccer could not exist if he had not risked it all for a cause he believed in more than life itself.  His reliance and persistence demonstrates that we all have the power to rise above whatever obstacle may stand in our way. His involvement in the sports community shines a light on why we at Grassroot Soccer, do what we do. He said: ‘Sport has the power to change the world…it has the power to inspire. It has the power to unite people in a way that little else does. It speaks to youth in a language they understand. Sport can create hope where once there was only despair. It is more powerful than government in breaking down racial barriers.’ I never fully understood the extent to which this was true until working for this organization, which  proves that through using the universal language of soccer, we can change lives.” ~ Claire Watt, Programs Intern, Port Elizabeth, South Africa

Run and Move for Youth in Africa on Dec. 21st!